Sing For Your Supper

New music by The Chefs - Sing For Your Supper is available NOW! A 12-course feast by The Master Chef (Dan Baird), The Golden Chef (Stan Lynch), and The Secret Chef (Joe Blanton). Featuring these prime cuts: 1. In And Outta Style 2. Nobody Left To Blame 3. Nothin' Looks Good On You 4. I'm a Goner 5. Goin' Back To Right Now 6. Your Heart Might Be In

New music by The Chefs - Sing For Your Supper is available NOW! A 12-course feast by The Master Chef (Dan Baird), The Golden Chef (Stan Lynch), and The Secret Chef (Joe Blanton). Featuring these prime cuts: 1. In And Outta Style 2. Nobody Left To Blame 3. Nothin' Looks Good On You 4. I'm a Goner 5. Goin' Back To Right Now 6. Your Heart Might Be In The Right Place 7. Bout As Famous 8. When Did It Get So Easy 9. Saving Grace 10. To' Down 11. Seemed Like A Good Idea 12. You've Been On My Mind

The Birthing of The Chefs

In a long-ago time, Stan Lynch and myself were not Chefs, no, merely Rock and Roll guys, just doing what we did. Through a long shot, happenstance and good fortune, we found ourselves together on tour in 1987 as part of The Rock and Roll Caravan, where he was the drummer in the Heartbreakers and I was singing for the Satellites.

It took us quite a while to really become buds, like maybe 3 seconds. There are folks you meet that you are insta-friends with. This was the case here. While going through catering and dining at the first night’s show together, I blurted out a reference to an old friend’s mowing service he’d named “the lawn chefs”. I have zero idea what prompted me to blurt it out, but the whole table thought it was funny as hell, except for Stan, who was hysterically crying laughing. I knew I’d found my kindred spirit.

Daily hangs between soundcheck and show, running partners whenever we could work one in. It was on one of those runs that one of us, not sure who, pulled off a pretty good impersonation of Sammy Davis Jr. “Let it cook man, let it cook!”, “Yeah, swing it cat!” “Who can take the sunshine?” “I knew a cat, Bojangles”. All Sammy, all the time. He’d bring up the lawn chefs and crack himself and me up. I’d say it was about the best 2 months of my public life.

So, time passes, and tours end. But on the last night, it used to be customary to have some fun at/with each other, and that fun was best done on stage for whoever and all to see. Unbeknownst to me, Stan had acquired a “Sammy-like” medallion and a proper poofy chef’s hat that I was to wear onstage. Oh hell yes I did. Tucked all my hair up inside the hat, pulled it down low to the eyebrows and donned my medallion then took the stage. Stan wasn’t immediately visible and I knew he wanted to see the fashion ensemble he helped create. I went to my vocal mic, and there, hiding in the photographer's pit, I spied Lynch chortling with an Instamatic, snapping away. I waited for the turn in the song, walked forward towards the pit, did a quick headbang, and for an endless 5 seconds, the chefs hat slowly floated down, landing directly in Stan’s face. He was overjoyed. I mean Christmas morning to a 5 year old happy.

We did a decent job of staying in touch through the years, lo and behold we screwed around and made a record together. Of course, we named ourselves The Chefs. Of course, I had the hat and medallion. It’s there on the backside of the CD. During the prep for the recordings we morphed into The Golden Chef (SL) and The Master Chef (DB). And that’s all the law and GC will let me divulge. 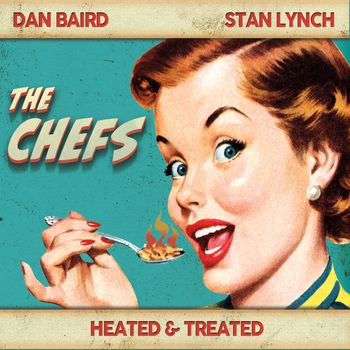 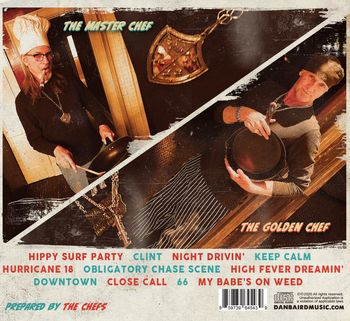 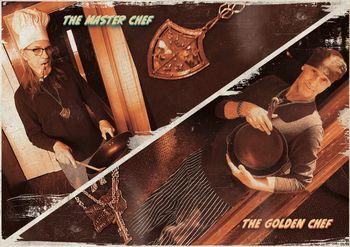